Are You Prepared to Evacuate Quickly in an Impending Emergency?

At this time of year, the last thing we want to think about is leaving our home.  It's cold, there is snow on the ground, and we are dreaming of "sugar plums", not evacuations.  However, there is never a good time for an emergency, and they never seem to strike when it's convenient.

So when you have a few minutes to slow down after the holiday, spend some time thinking through what you would need to take with you if you were to leave.  There is an interesting phenomenon called the "Normalcy Bias".  This bias causes people to underestimate both the likelihood of a disaster and its possible effects, because people believe that things will always function the way things normally have functioned. 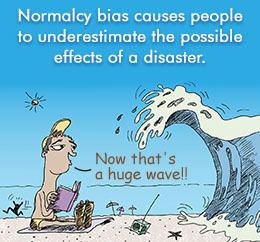 An example I have heard and will paraphrase is from a man caught in wildfires in Southern California.  His home was being threatened, and he was given 3 hours to get his things and evacuate.  Instead of calmly and rationally gathering his valuables and irreplaceable items, he paced in front of the TV, watching CNN report on the advancing flames, sure it wouldn't really get to his home.  By the time the fire was so close he had no choice but to leave, he had five minutes to throw his dogs in the car and get out with nothing but his life.

Why did he waste all of that precious time?  Because his house had never burned down before, why would it now.  This sounds ridiculous, but it's a very real thing that happens in an emergency.  To outsmart the normalcy bias, you have to prepare ahead of time and have a very systematic way to evacuate your home.  Less thinking and decision making in an emergency, the better off you will be.

Here are two great lists and the links to find them.   Use them and the ideas below to prepare your list. 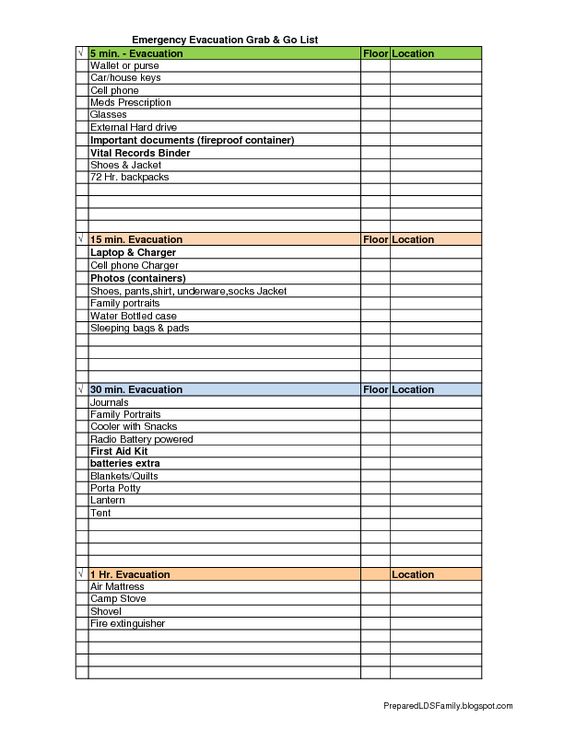 What Would You Take if You Had to Evacuate? How to Create a Grab & Go List

(Adapted from preparedldsfamily.blogspot.com.)
What would you take if you had to evacuate? Many people do not think clearly during times of stress and panic, so a well thought out Grab and Go List created before an emergency could greatly assist you. It should have items listed by priority because you do not know how much time you will have to evacuate. Not all evacuations can be planned in advance like hurricane evacuations. You could get a knock on the door in the middle of the night and be told you have a few minutes to leave. You may never experience an evacuation, but you can learn from the experiences of others. Most will tell you that the better planned you are, the fewer regrets you will have.

Consider these things when planning your Grab & Go list:

How to Organize Your Grab and Go List:
1. List items which are important and essential to you.

3. List the location of the item next to it, and then sort within each group based on areas of your home. This will prevent you from running all over your home only to pass up items in the same area.

4. Ask other family members what things in their rooms are the most important and irreplaceable to them. Pay attention to what children say.

5. Make several copies of the list and post it in several places in your home such as upstairs, downstairs, or on either end of your home. Keep a copy of your list in your cell phone by emailing it to yourself since you may get a call from a kind neighbor who wants you to tell him what to take if you are not at home.

6. Do a practice evacuation with your family and use your list. You could assign different family members to gather different items. You could also practice with all of them, and then with only a few of them.


Posted by Michelle Jorgensen at 7:21 PM

Time to take the survey! Take it here:
https://goo.gl/forms/gjVnrNWiz9R5eMPC3

How can I Learn How to prepare?

Find information about a variety of topics. You can:
1. Watch a video on MM Self Reliance Youtube Channel
2. Read and download Documents about each topic
3. Watch for upcoming Group Buys and Hands-on Classes